Happy Saturday! :) A big shout out to all the Dads out there...have a great Father's Day!

A recap of LAST WEEK (12-18 June 2022) around the World shows the U.S. trending +0.8F warmer than last year making it the hottest week before Father's Day in over 37 years! Rainfall was also down 15% vs last year, driest in 27 years and 3rd driest in 37 years with much below average rainfall. CLICK ON IMAGES FOR A LARGER VIEW. 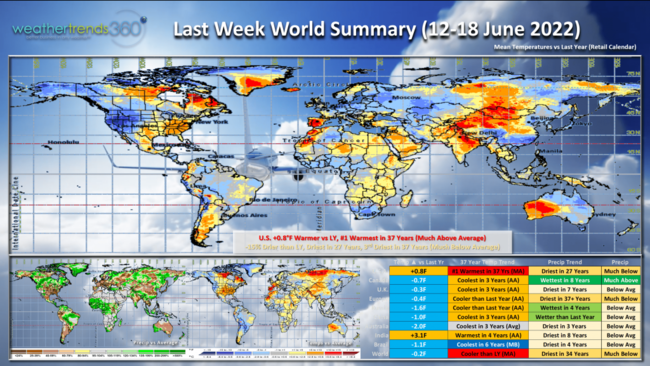 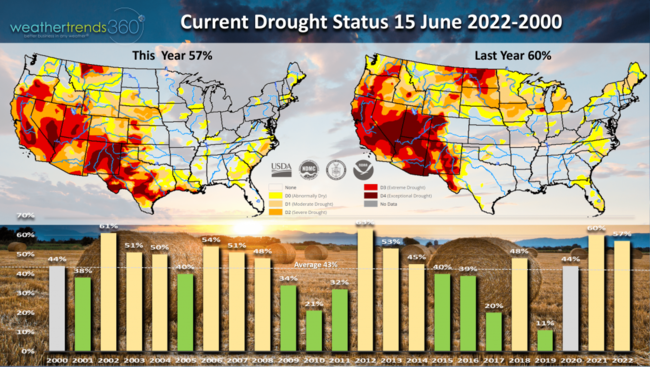 Despite the hot/dry week, dry to drought phases across the U.S. improved a bit with 57% of the U.S. still dry vs 60% last year and an average for this time of year of 43%. The most improved regions are the Upper Plains and the North and West Corn Belt. Major flooding in Wyoming certainly put a dent in the drought there but expanding conditions across Texas. 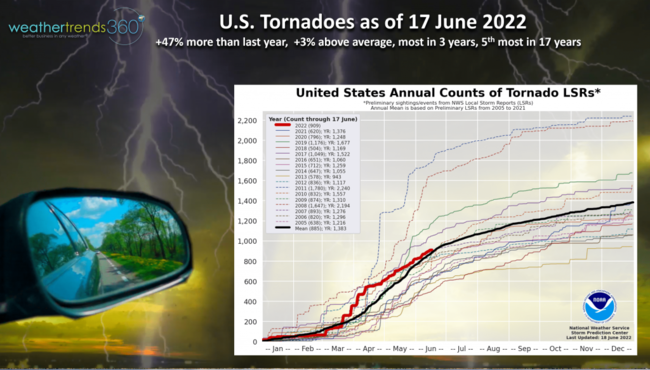 Tornado counts are still high with 909 so far this year, up +47% vs last year, +3% above average and the most in 3 years, 5th most in 17 years. The current pattern suggests a lull over the next couple weeks with the hotter/drier pattern. 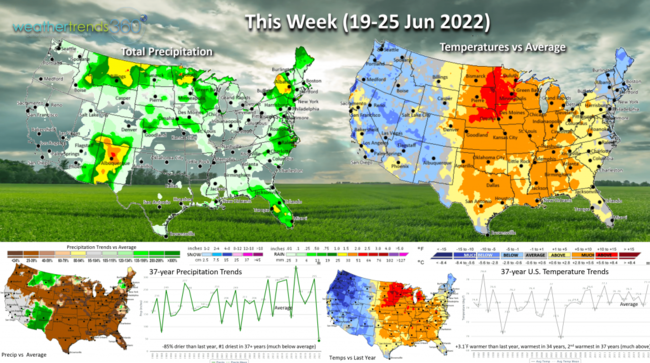 This week (19-25 June) across the U.S. shows a major warm up in the Northeast where it was the coldest Father's Day weekend in over 37 years, we'll take it! For the U.S. overall, the week trends +3.1F warmer than last year, warmest in 34 years and 2nd warmest in 37 years with expanding heat in the Central U.S. The cool spots are in the West and New England. Rainfall down a whopping 85% vs last year and least in over 37 years. These are very positive trends for hot seasonal categories like beverages, A/C, fans, pool supplies, Summer apparel and pest control categories for stinging pest over mosquitoes.

Need to watch the tropics as the Eastern Pacific and Southwest Caribbean remain favorable areas for tropical development. The second named storm of the Atlantic Hurricane season is possible as we go into next weekend, south of Texas for now, but something to watch. 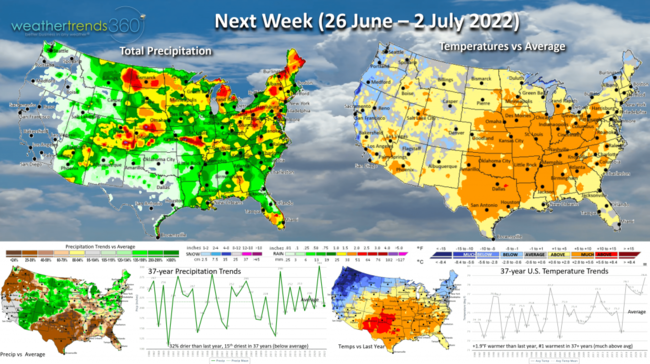 Next week (26 June - 2 July) more of the same with the U.S. trending +1.9F warmer than last year and #1 warmest of the past 37 years. Expanding heat in the East and a warming trend in the West despite trending cooler than last year from California to Montana. Rainfall a bit heavier than this week, but still 32% less than a year ago and 15th driest of the past 37 years. Some beneficial rains in the Southwest and Central Plains to help with drought conditions. 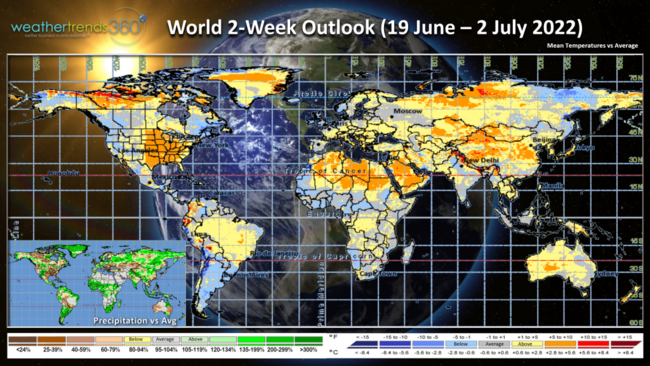 The 2-week World outlook for 19 June - 2 July shows Summer-like heat in the Eastern half of the U.S., warm across Europe and hot in China. 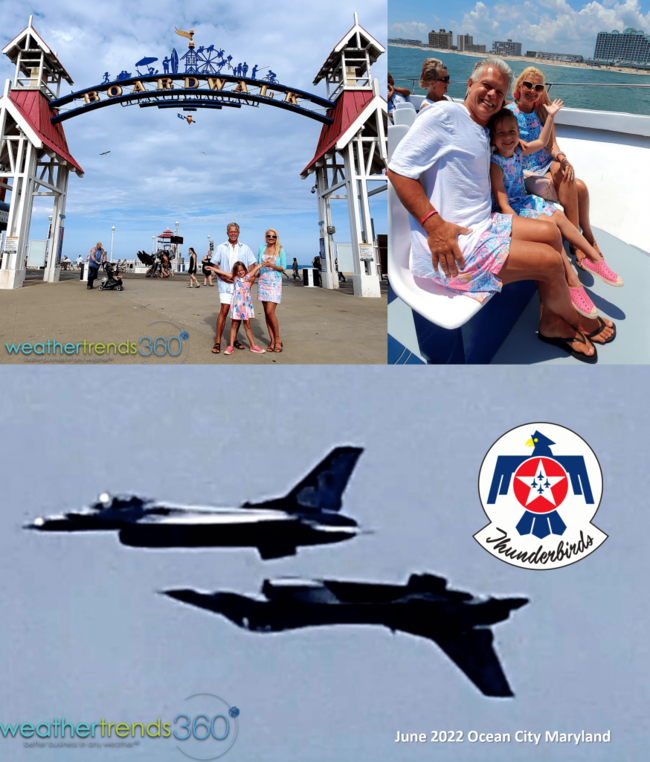 A big THANK YOU to wt360 meteorologists Pam and Krissy for holding down the fort while I was out. Took Mrs. Kirk and the little Angelina to our favorite close to home vacation spot - Ocean City MD - to see the Air Force Thunderbirds. 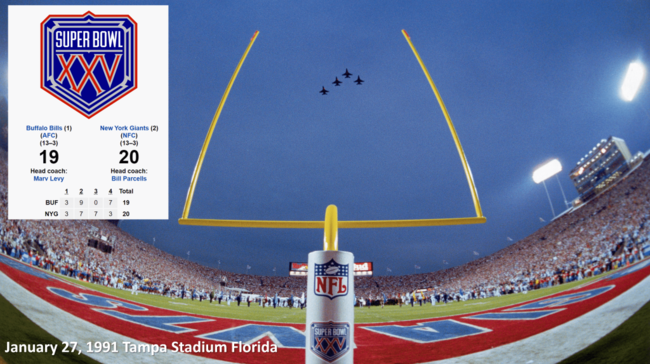 Some 31 years ago while stationed at MacDill AFB the then 1st LT Kirk was the chief meteorologists for Super Bowl 25 for the NY Giants and Buffalo Bills exciting game. The highlight was meeting the Air Force Thunderbirds and providing them the easy flight weather forecast before the game. Always fun to watch their amazing skills; the little Angelina Kirk thought the upside-down thunderbird was hysterical. Enjoy a minute of the show in today's video.