Captain Kirk hopped in the transporter and beamed himself to a well-deserved week of vacation at the beach with family. WT360 Meteorologists Pam and Krissy here, taking over the controls this week.

A recap of last week (05-11 June) across the World shows the U.S. trending -3.8F colder than last year and ranking as the 17th warmest in 37 Years. An area from the Northern Plains through the Midwest and into the Northeast trended much colder than last year while the West Coast trended, on average, 5-10F warmer than last year for the week. Trends across the South were a bit more mixed, with warmer year-on-year trends from the desert Southwest into Texas and the Central Gulf but cooler trends along the coastal Southeast. Excessive heat this weekend (June 11-12) will have cities from the desert Southwest to Texas baking with widespread +90F heat (+110F in the deserts!). Stay cool, drink plenty of fluids, and avoid being outdoors if you find yourself in this area of the country this weekend. CLICK ON IMAGES FOR A LARGER VIEW 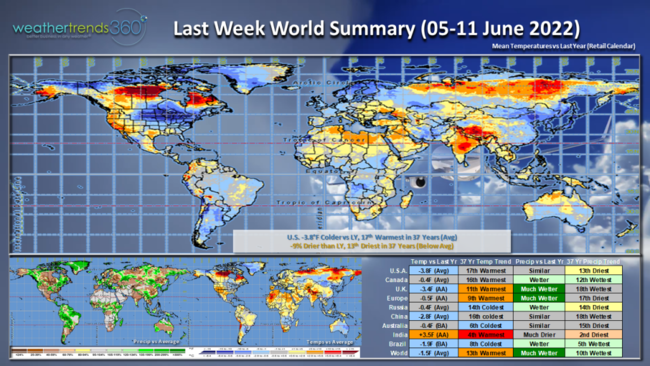 Rainfall was -9% less than last year, trending the 13th driest in 37 years with below average national rainfall.

The U.K., China, and Brazil each trended colder than last year, although temperatures in the U.K. still trended above average. Canada was similar to last year and average but with higher rainfall than 2021. Temperatures across Australia continued to trend below normal this past week with the coldest trends in 10 years. India, however, was the hot spot this past week, ranking the 4th warmest in 37 years and warmer than both last year and average.

The Atlantic Basin is calm at the moment. Early last week, after bringing flooding rains to southern Florida and western Cuba, Tropical Storm Alex traveled northeastward through the Atlantic, passing Bermuda to its west. Alex recorded peak intensity winds of 70 mph before eventually becoming a post-tropical cyclone on 6/6. Although there are no areas of interest at the moment, WTI is forecasting another active Hurricane Season in 2022 with multiple areas designated as high risk for impact. 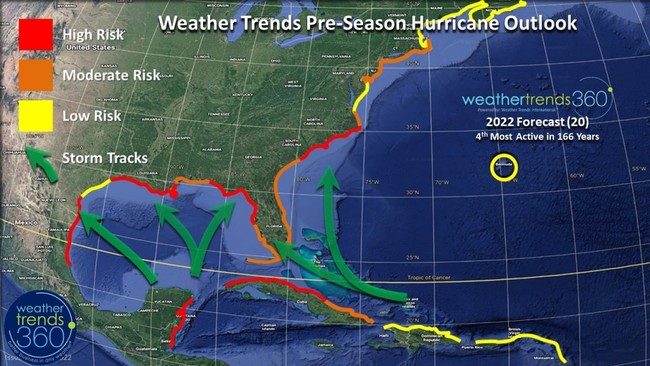 This week (12-18 June) is forecast to trend +1.3F warmer than last year and +4.1F above normal, trending the 1st warmest in 37 years. While national rainfall will trend very similar to last year, it will trend below normal and the 7th driest in 37 years. Rainfall looks to be most prevalent along the East Coast and in the Northern Plains. Although much of the West will trend much colder than last year - a negative for demand of seasonal categories - cooler than normal weekly average temperatures should be held mostly to the Northwestern portion of the country. The overall warmer and drier trends for the week should prove favorable for categories such as summer apparel, suncare, and cold beverages. 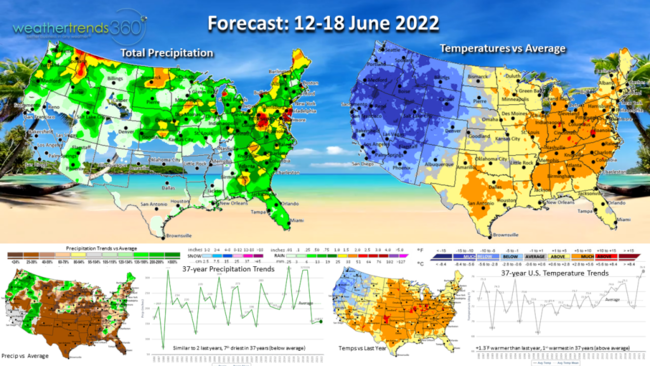 After a relatively cool and comfortable start to June, the heat is on across a large portion of the U.S. Corn Belt in the second full week of June with widespread temperatures in the 90s and heat indices in the triple digits in the first half of the week. The heat may subside somewhat in the second half of the week, but we don't see a return to the cooler temperatures at the start of June anytime soon.

Father's Day 2022 (19 June) will be warm and dry for much of the country. National temperatures are forecast to trend similar to last year, ranking as the 6th warmest Father's Day in 37 years. Trending much drier than both last year and normal, rainfall on Father's Day is expected to rank the 8th driest in 37 years. Shaping up to be a beautiful day to celebrate Dad! 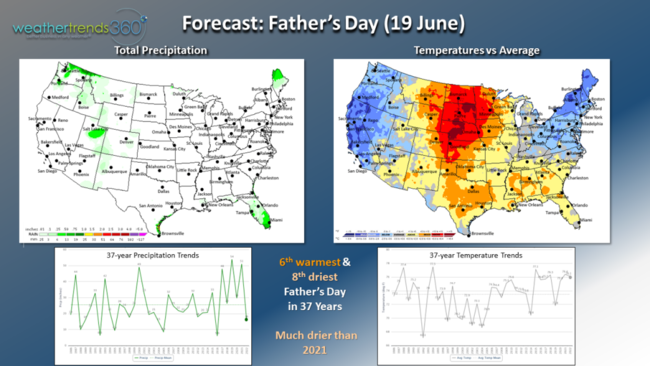 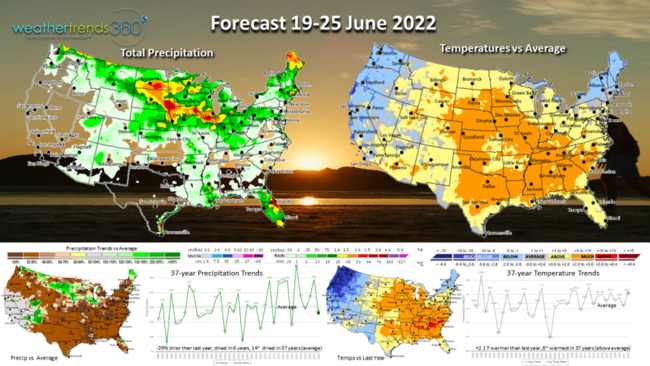 This time last year, temperatures were on the rise across the Northwestern U.S. and Western Canada before a record-breaking heat wave officially started in the region on June 25th. Cities like Seattle, WA and Portland, OR recorded back-to-back-to-back days with highs exceeding 100F and overnight lows trending warmer than normal daytime highs. Due to the excessive heat, consumers quickly snatched up any available ACs and fans, leading to a sharp increase in demand and widespread stockouts across retailers. With much more seasonal temperatures to close out the month this year, demand for these hardlines will be down significantly from last year.

The World overall (12-25 June) shows cooler trends across the Western U.S. and Canada but warmer East of the Rockies. An overall warmer pattern is expected across Europe, the Middle East, and Australia. 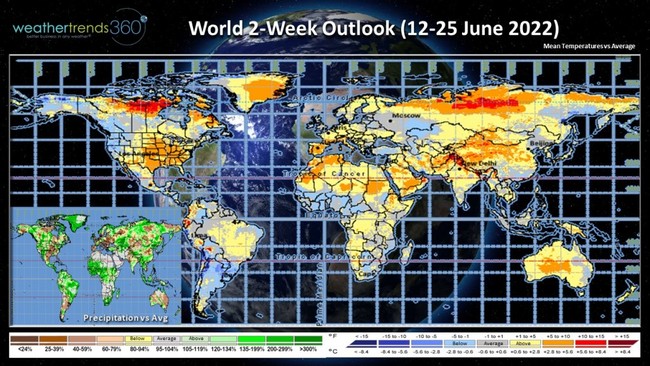